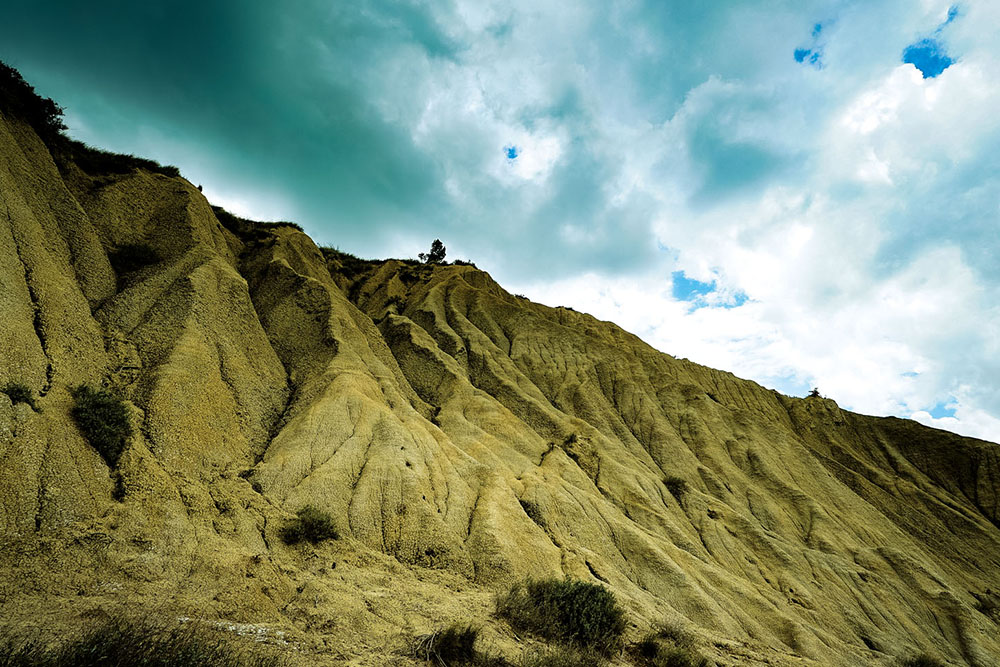 Turningin land from the coast, the Sinnic motorway follows the course of the Sinni river; one of fiverivers that cross the region. Here, the landscape changes radically and you find yourself on a long road which links the Ionian coast to the in land and carries on toward Mt Pollino.

Travelling through small villages such as Rotondella, Colobraro and Valsinni, youa rrive in the province of Potenza and the landscape opens up to reveal the Monte Cotugno dam, the largest in Europe built in redclay and is a symbol of one of the most precious resources of Basilicata: water.

Not far from here, Senise, whichreigns over the Serra potamo valley, begins to tell a different story – that of its IGP pepper. The pepper’s characteristics are itscrimsoncolour (thoughthereisalso a green variety), its ever sweet flavour and its various shapes: pointed, hooked and truncated. The IGP Pepper of Senise is also produced in other neighbouring towns, found both in the province of Potenza butalso in that of Matera.

Itis from Senise, which act salmost as a divider, that one can choose to either head toward the ravines that characterize the outer limits of the Agri Valley or up toward Mt Pollino.

The centuries have moulded this clay landscape, creating strange and fantastic sculptures, arid peaks and cathedrals of sand. It’s the sandstone of these places that characterizes the lands overlooking the ravines, which often hide ancient caves within which excellent wine is produced. Such is the case of the DOC marked Grottino di Roccanova, a wine produced in the town of Roccanova in the Agri Valley. Though boasting centuries of tradition, it has not been labelled as DOC for very long. Thanks to its geomorphological idiosyncrasies, this environment allows the barrels to be kept at a constant temperature and humidity level all year round thereby assuring the finest result for this wise combination of Sangiovese, Montepulciano, Cabernet and black Malvasia grapes. There is also a white wine, aromatically produced with the white Malvasia grapes of Basilicata.

From here on, hills slowly become mountains and finally merge with the 2200m tall Mt Pollino. Along with a few other tall peaks, this mountain is representative of a particularly prized area – the largest national park in Italy. Its 192,000 hectares are split between Basilicata and Calabria. 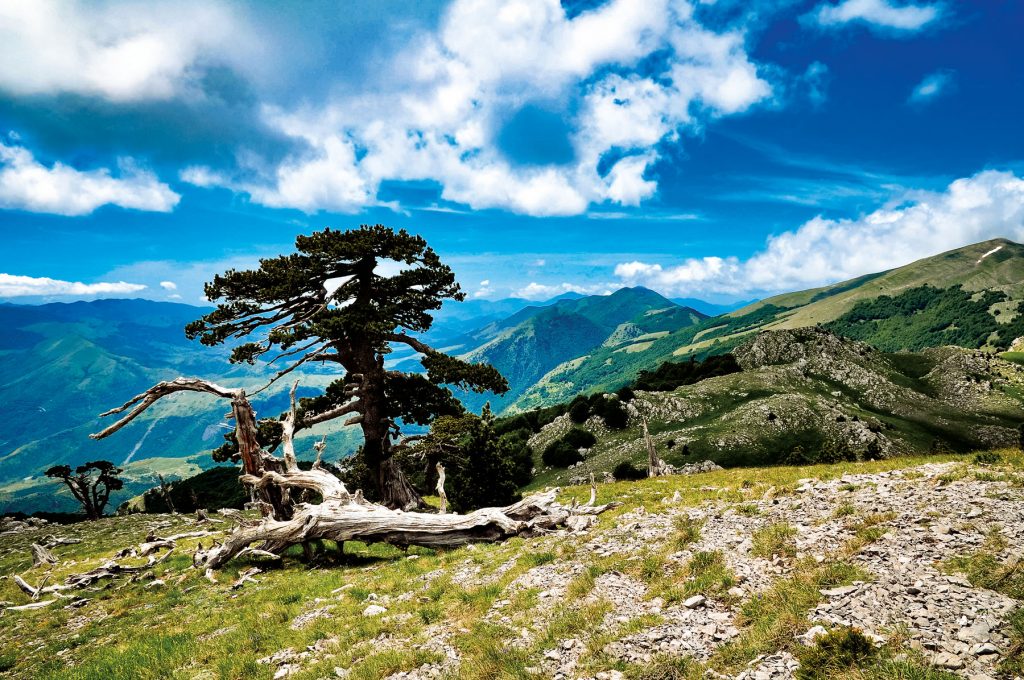 One of the most emblematic towns in the park is Terranova di Pollino, not only on a scenic level, but also gastronomical. Delicious traditional dishes – prepared with products from the mountain – have long survived here, eventually becoming recognized as true delicacies.One need only consider, for example, the red, DOP classified Rotonda eggplant. Named for its round, tomato-like shape it can reach upwards of 200g in weight. Its pulp is quite meaty and slightly spicy, with a light bitterness. Apart from the town of Rotonda, which is also the centre of the park, the red eggplant is also grown in the towns of Viggianello, CastelluccioSuperiore and CastelluccioInferiore.

These same towns also cultivate the white DOP Beans of Rotonda, known for their high protein content as well as their thin skins which are due to low calcium levels in the soil and to the abundance of water which allows the build-up of starch within the seed.

The CaciocavalloSilano DOP takes its name from the mountainous area of Calabria called Sila, although its production stretches far beyond the Calabrian border into Basilicata, through Campania and all the way to Puglia and Molise. It’s a semi-hard, stretched-curd cheese produced using cow’s milk. It gets its name, Caciocavallo, from the way it’s tied in pairs which allows them to be hung as if on a saddle from a wooden pole near a fire.

Let us now turn to Terranova, where the rich biodiversity of Pollino has become physically tangible, here, production is multifunctional. Crops are organized using historical research based on the pedoclimatic conditions of the soil, focusing on high-quality varieties. This made it possible to revive the “Carosella”, an ancient native variety of soft wheat which has been cultivated since Roman times all along the Lucanian Apennine mountains. Reaped by hand and highly resistant to harsh winters, it allows the production of a highly valued flour for bread, pasta and biscuits.

Another native wheat variety is known as “segale Iermana”, a type of rye flour adapted to the mountain terrain which was rediscovered in recent years by the farmers in the national park of Pollino.

Among vegetables, recent years have seen the reassessment of the red potato of Terranova. Legumes, however, have seen the planting of about 30 varieties of bean using the medley method.

In Lauria, where Pollino meets Val d’Agri, a respectful continuation of precise procedures and a constant monitoring of the cultivations through advanced technologies have allowed hundreds of varieties of aromatic plants to bring colour and sents to the Park and some profits to those who chose to stay and invest on the territory, cultuviate these plants and then transforming them into cosmetic products and herbal medicines. 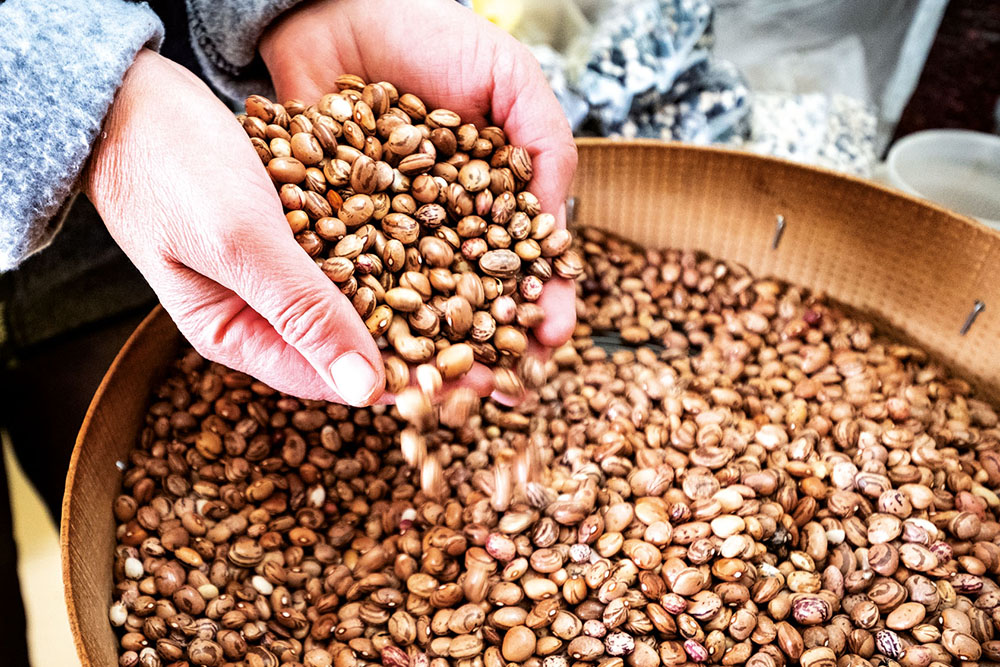 Moliterno is one of the towns of the Lucanian Apennines-Agri Valley-Lagonegrese National Park, boasting forests of beech trees and a predominantly agrarian-pastoral economy. It was here that the IGP marked Pecorino Canestrato was discovered – a spicy cheese with an irresistible bouquet. Left to rest for at least 60 days, it is derived mostly from whole sheep’s milk but also of whole goat’s milk. It can be enjoyed as either a primitivo (aged 6 months or less) or a stagionato (aged 12 months or less). The milk is sourced from flocks raised among 60 villages in Basilicata, of which 46 are in the province of Potenza and 14 in the province of Matera. The aging process, however, occurs solely in the unique cellars of Moliterno.

A few kilometres from Moliterno we find Sarconi where around fifteen varieties of beans are produced and internationally exported under the label of the IGP Sarconi Bean. These beans are distinguished by their shape and colour and for the soft flesh that allows them to be easily digested.

Besides Sarconi, the production territory consists of other towns such as Grumento Nova, Marsiconuovo, Marsicovetere, Moliterno, Paterno, San Martino of Agri, Spinoso, Tramutola and Viggiano – all of which are located in the province of Potenza and form part of the lands of the Agri Valley.

During the past few years, Sarconi has also been associated with heliciculture: the maintaining of snails as livestock. The biggest snail livestocks in Southern Italy were born thanks to a young businessman who invested in snails – perfect for food in terms of nutrional values, rich in protein, mineral salt, poor in fat and with low calorie content, a good quantity of calcium, magnesium, phosphorus and vitamin C – and with a natural cure for the skin in their drool.

Before finishing with the wonders of the Agri Valley, we must remember that in these parts of Lucania it’s possible to find yet another good wine: the DOC marked Terre dell’Alta Val d’Agri. This is another example of an ancient winemaking tradition found deep in the heart of Basilicata, which bases its production on the cabernet and merlot grapes.

Frequent variations in temperature, which are typical of the production area, impart an elegant aroma to this wine and a particularly soft finish.