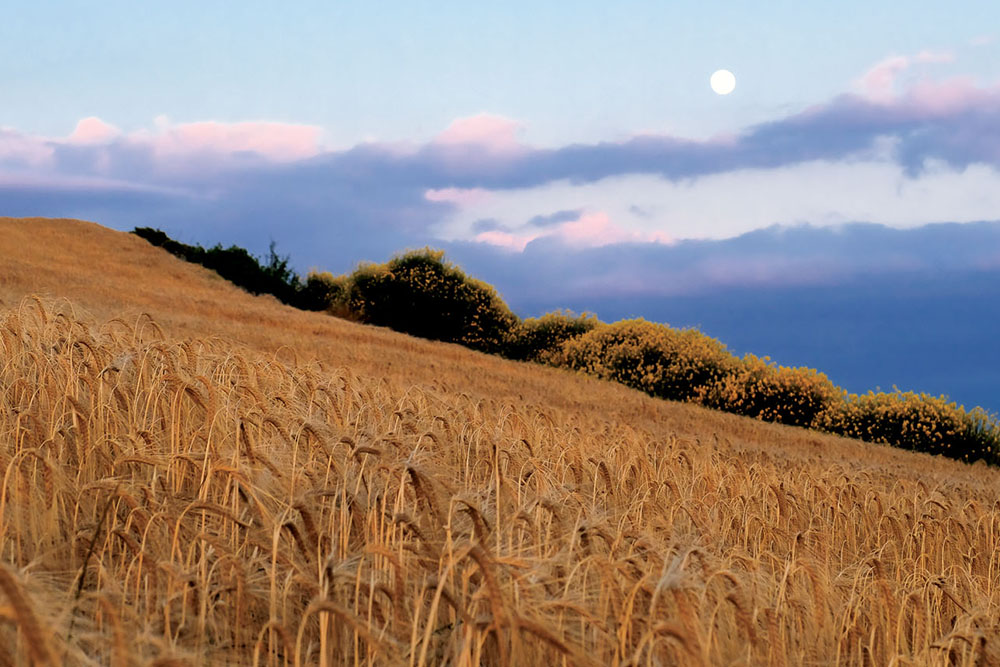 Cereal cultivation is the main agricultural vocation of the lands around Matera. It would be impossible not to lose yourself in the endless fields of wheat – just outside the main urban areas – especially during the summer, when the lustrous dominance of gold best illustrates the value of the raw material. Over the years, other crops have been added, such as lentils of Altamura, an IGP trademarked symbol of Lucanian excellence. This lentil is produced in the areas of Montemilone, Palazzo San Gervasio, Genzano di Lucania, Irsina, Tricarico, Matera, Banzi, Forenza and Tolve. With its green colour and being slightly sweeter than other varieties – with hints of herbs and aromatics – it is unique for the fact that they are harvested before fully maturing. In terms of nutritional qualities, it is rich in iron and carbohydrates, but easy to digest thank to the presence of various types of fibre, mineral salts and vitamins.

Wheat evokes imagery of the past, of housewives making bread at home on the same wooden tables where children – next to their toiling grandmas – attempted to imitate the making of orecchiette and cavatelli because the maccheroni were too difficult. The taste was so good, and the ingredients so genuine, that you ended up trying some raw. Then came the arrival of commercial pasta, but those grandmas never stopped making their pasta at home. Today, some of those grandchildren have decided to introduce these homemade types of pasta to the market, working directly from the fields to the mills and then the factories, retracing – little by little – all the varieties of grain that were once available in the area, such as Saragolla.

There was a time when housewives also made bread at home, then took it to be baked in communal bread ovens. They marked their loaves with a wooden stamp, which usually had the initials of the head of the family. Today, the bread of Matera (a city of UNESCO heritage) holds an IGP (protected geographical indication) status because the ingredients are always the same: sourdough yeast, double-milled durum wheat flour, salt and water.

After leavening, it is shaped and then baked in the wood oven which renders it a golden brown – almost yellow – in its crust, crunchy with traces of burnt aromas. It is a bread which can be good for even seven days and pairs well with the olive oil from the hills of Matera.

In Ferrandina the cultivation of the olive in these parts has its roots firmly planted in the history of one of the area’s oldest and most characteristic trees, which the native Materan has grown so fond of. The lands of Matera are inextricably tied to the Majatica, an ancient and precious olive cultivated not only for its oil but also to be cured and eaten whole. This is especially true of the baked olive, protected by the Slow Food movement as it is at risk of extinction.

Further south, along the Basentana ridge (which from Ferrandina carries on towards Metaponto) the maritime influences of the Ionian coast reach all the way up to the hills, where the DOC-protected Matera wine is produced. Its stars are the Primitivo amongst its reds and the Greco amongst its whites.